... away from trouble, city noise, smog...
rooms are well-prepared and over-all clean…
indescribably wonderful outdoor spaces...
To make things perfect, the cherry on the cake, is the warmth of this family !!!!
We will return!!!
Valentina

B&B is perfect…
splendid room which also includes a gas for cook something fast...
Sara (the owner) very good, polite and helpful throughout and also an excellent cook…
I will return.
Luca

We stayed in 2010, my kids still talk about your wonderful place is unforgettable, we have been worthily, thanks Sara
Grazia

You could stay at a cute farm holiday...
it is cheap, I was there this summer and I really enjoyed it.
This B&B is an old farmhouse that was rebuilt, located in one of the most beautiful parks in Umbria, the atmosphere is relaxing, the owner is very nice and polite!
...including a breakfast like a king, customizable (coffee, hot or cold milk, jam, cake, etc..).
Fapilù Travel agency 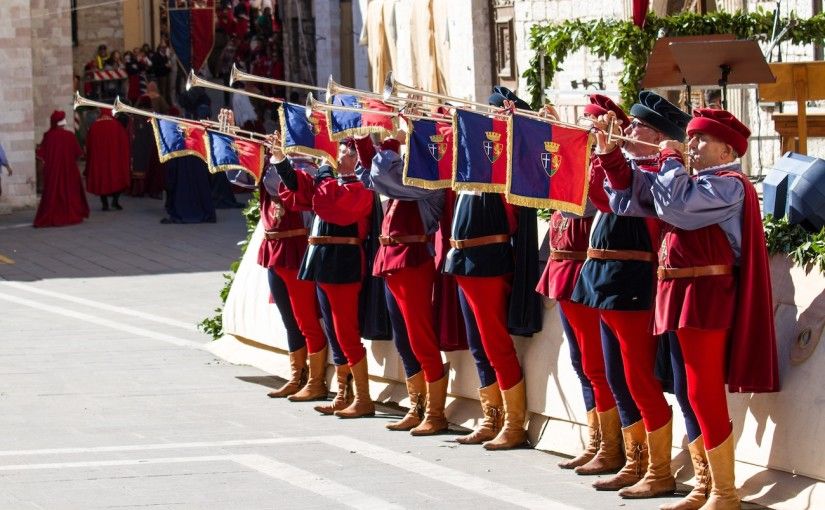 SAINT MARY OF THE ANGELS (Assisi)

Plate S. Anthony with Holy Mass in the morning, the procession, blessing of the bread and animals. During the day there will be a service of plate of San Antonio at the various restaurants in the country and then the traditional Running of the Donkeys.

Carnival floats will parade every Sunday of the month through the streets of the surrounding countries.

ASSISI
Palm Sunday Holy Mass in the basilicas and churches in the country.

ASSISI
Holy Week. Traditional rites: Holy Thursday is the deposition of the crucifix, and the Good Friday procession with the transfer of the Dead Christ by St. Rufino Cathedral, the Basilica of St. Francis in the evening processions with the medieval confraternities, with path lit by torches, the Cathedral of St. Rufino with the statue of Our Lady of Sorrows at the Basilica of St. Francis.

ASSISI
National Exhibition of antiques with the presence of Italian antique dealers getting better.

Calendimaggio Day
Feature historical re-enactment of medieval costumes and customs, shows, concerts, dances, songs and performances by the archers and the two factions of the flag of the medieval “Upper Part” and “Lower Part.”

ASSISI
Ascension of Christ
Holy Mass in the most important churches of Assisi, folk festival with games on Subasio.

Run of Ceri
The candles are three wooden machines that weigh 4 tons each, surmounted by statues of Saints Ubaldo, Giorgio and Antonio, carried on the shoulders from the old town to Mount Ingino where the basilica of the patron.

CASCIA
Celebrations in honor of St. Rita. Start with a candlelight vigil and thousands of candles lit along the streets. Procession in the morning.

Open Wineries
Tastings and events related to the world of wine.

Features Flower Festival of “Infiorate” along the streets of the village. The street picture represent figures of liturgical reasons, using flowers and fragrant herbs.

The Market of the Gaite
It’s a typical medieval reenactment of life. The population of the four Gaite challenge each other in setting up shops, taverns and markets.

SAINT MARY OF THE ANGELS (Assisi)
Feast of Pardon. It is celebrated in the Portiuncula since 1216, the year in which Honorius III established the indulgence.

ASSISI
Feast of St. Clare, patron saint of television, in the homonymous basilica.

ASSISI
Feast of San Rufino, the patron saint of Assisi.

ASSISI
Feast of the Assumption. Holy Masses in churches surrounding the Basilica of St. Francis.

Ride of Satriano with passage at Armenzano town. Re-enactment of the last return of S. Francis of Assisi.

ASSISI
Feast of the “Canticle of the Creatures” at the Shrine of St. Damian. Demonstrations inspired by the life of St. Francis and St. Chiara.

ASSISI
Feast of St. Francis with celebrations in honor of the patron saint of Italy. Liturgical ceremonies in the basilicas of St. Francis and Santa Maria degli Angeli civic events with the presence of the representative of the Italian government and the highest authorities of the region, which in turn represents each year throughout Italy, offering oil to fuel the votive lamp that burns before the tomb of St. Francis. There will also be dance and folk songs of the region concerned.

Open Crushers
Big party for the pressing of the olives and the new oil.

ASSISI/SPELLO
Exhibition of nativity scenes in the streets of the city.

Living Nativity in the village
25 to 26 December, January 6th.

This website uses cookies to improve your experience while you navigate through the website. Out of these, the cookies that are categorized as necessary are stored on your browser as they are essential for the working of basic functionalities of the website. We also use third-party cookies that help us analyze and understand how you use this website. These cookies will be stored in your browser only with your consent. You also have the option to opt-out of these cookies. But opting out of some of these cookies may affect your browsing experience.
Necessary Always Enabled
Necessary cookies are absolutely essential for the website to function properly. This category only includes cookies that ensures basic functionalities and security features of the website. These cookies do not store any personal information.
Non-necessary
Any cookies that may not be particularly necessary for the website to function and is used specifically to collect user personal data via analytics, ads, other embedded contents are termed as non-necessary cookies. It is mandatory to procure user consent prior to running these cookies on your website.
SAVE & ACCEPT